I had long had a plan about getting back into making bread again. Because I did, once. Sometimes even successfully, other times not so much — but it is a learning experience when you face failure.

Then I did not for a very long time. Then sporadically here and there, the last couple of years. Bought various pizza stones to use for pizza as well as for bread. They always break. Then I bought a baking steel instead, mainly for pizza use. But I caught the bug again and started looking around the internets for advice. Borrowed a Ken Forkish book from the library, and found it perhaps a bit above my skill levels at the moment.

A colleague let me look at her James Morton book, Brilliant Bread. That got me started again and I ended up ordering the book for myself. I have also bought assorted bannetons, lames, scrapers, and what not. When in doubt: go shopping.

Just about everybody has heard about Jim Lahey’s no knead bread? If you haven’t, Mark Bittman will get you up to speed. It could look like this: 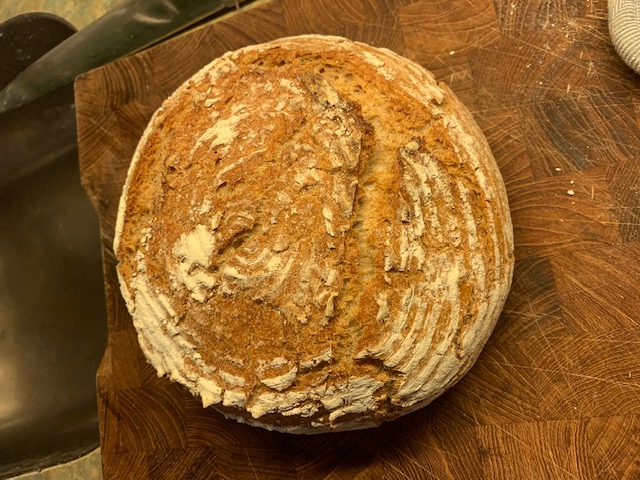 It is surprisingly easy for a quick bread fix, and it is good. If you use high protein bread flour it will get nice holes and all. What it will not get is the deep flavor and the durability of sourdough, but there certainly is a place for this.

Now, it is claimed that there is an even faster way, so I absolutely have to try that. I sort-of doubt the flavor will be exactly the same. We shall see.

My colleague went ahead and did it, and I must say: although edible, not a loaf that encourages you to try this.

Real bakers use sourdough. That much is clear so I have of course started my own starter. I see that people get rather attached to their starters and give them names. They are, I assume, living organisms and can live a long time. I shall call mine Elvis for no particular reason. Also, a couple we know split up recently and the first object the husband (who moved out) picked up to take with him was his sourdough starter. I guess I already mentioned that you do get attached?

But for now my starter is quite young and has a pleasant, milky odor most of the time. Not that strong yet, but hungry all the time. I even put Elvis in the fridge to slow him down a little, but he sure did act hungry even then. There will be a whole lot of discard to use at this rate. I already made some Sourdough Discard Crackers with Rosemary and Olive Oil. They are so good.

In a cold oven: an interlude

This is what in our household is called “doing an Epicurious”. That is: use a recipe but completely disregard it. Or at least mostly so. So I wondered if you can bake in a clay pot — a German Römertopf — and if so, what is the best way to do it. I already sort-of knew that it should go in a cold oven, and I found that there is a whole school of thought about starting bread off in a cold oven, especially when the bread is inside a Dutch oven. Or a Römertopf.

So. Using Mr. Morton’s recipe for an advanced white bread (which still has yeast but also some sourdough starter and is bulk fermented cold for some 10 hours) I dug out our old and very little used Topf. This is not what Mr. Morton says to do, but hey? There is a lot of info about the whole cold oven baking thing so I thought is might just work.

Well. How did that go?

I made the dough in the morning. 30 minutes autolysis, kneading until passing the window pane test, 9 hours in fridge, shaping it (it came together real nice), 90 minutes of proving. 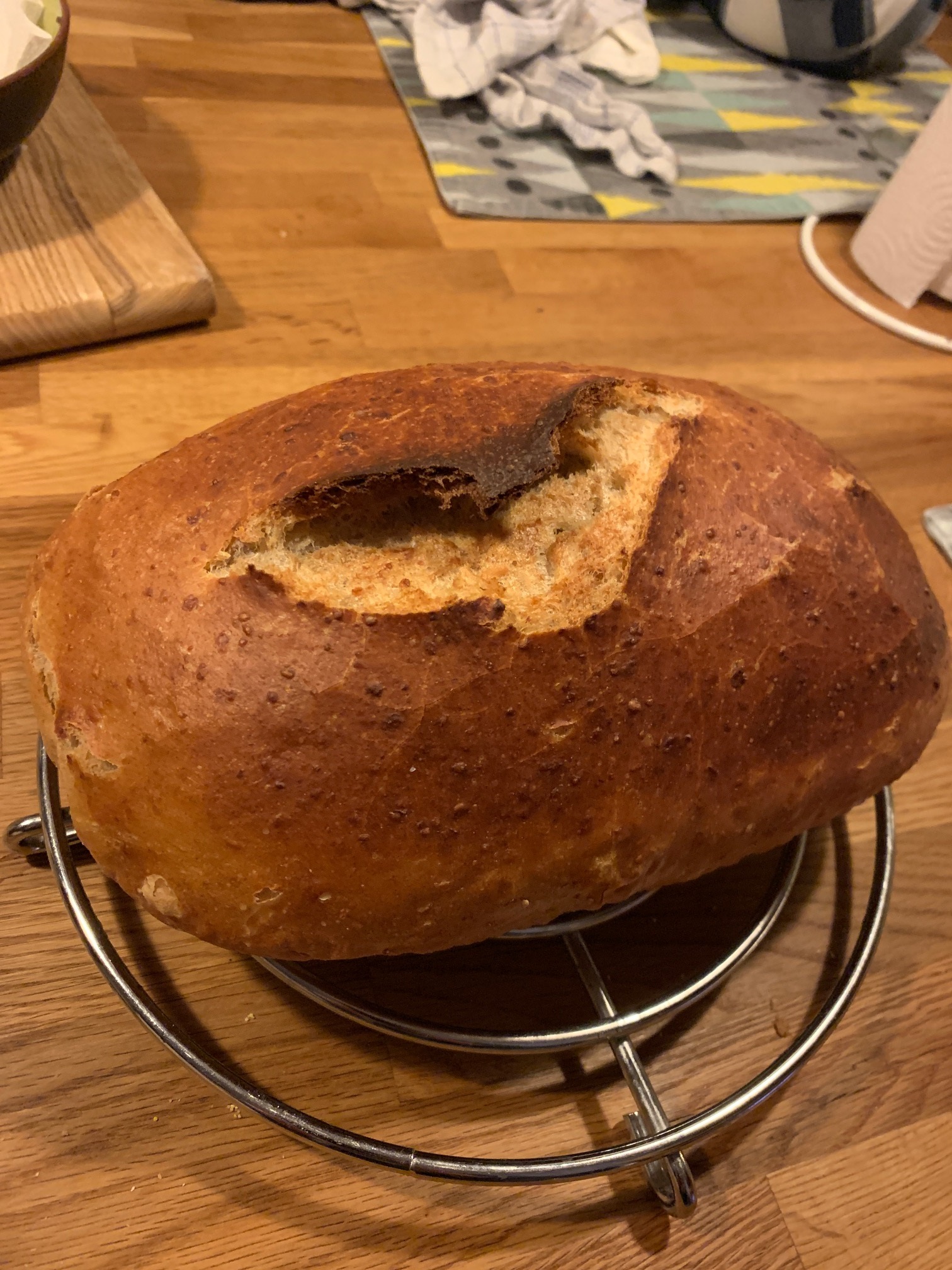 Yes: I did forget to score it. Maybe that played a part as well. Otherwise, nice color, an ear, crumb slightly denser then I had hoped (plenty of small and smallish holes, and also nice and melting). The crust, though. Thin but chewy right from the get-go. Almost no crust on the bottom. Nice flavor (sourdough could have been tangier so the microfeed the night before was a mistake).

What went wrong? For starters, I did not have strong bread flour so used half (Danish) AP which probably is not as strong as UK/US AP. The other half was 40% Ølandshvede — an old Scandinavian variety, close to spelt, and as such high in protein but quite “soft”. And some 10% of wholemeal to give it a little fiber. It felt really nice, but I have to admit that it did not double during the proving.

And I did did the Römertopf/cold oven thing. I soaked the Römertopf with water for 15 minutes and that is perhaps the main mistake. I guess that the state of the crust could be explained by everything being very damp — or even wet.

Still. It will be a nice sandwich load I guess. I also tried the Römertopf because I wanted a batard to make the loaf more useful for sandwiches, so not the usual Dutch oven boule.

I think I will give the recipe another go, using strong flour and making a batard on my baking steel. It did feel oh so nice when I handled it.

Mr Morton has a nice pain de campagne I am eager to try now the sourdough starter is going strong. There is the Rubaud method to try. I need to make Danish rye, but I also need to make deli style sourdough rye to use for Reuben and other sandwiches. 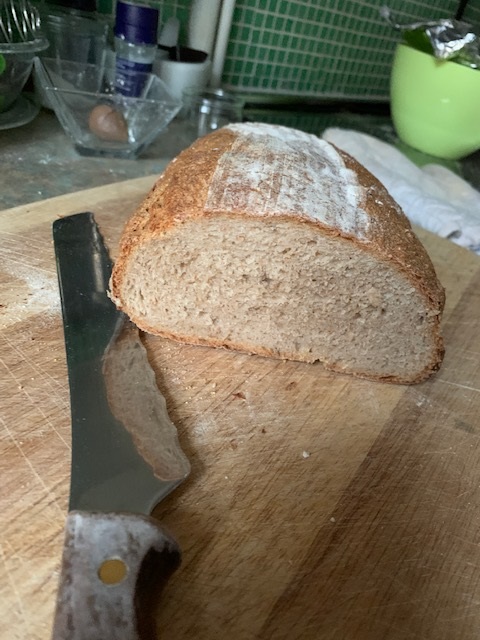 So: I had some success this weekend. I did Morton’s pain de campagne.

Alas, I only had sifted, not whole, rye. The flavor is quite good — especially with some sharp Cheddar — but truth be told, it does remind me of a plain old Danish sigtebrød. Not bad, but the Earth does not move either.

And then I had more success with some baguettes, also from Morton. 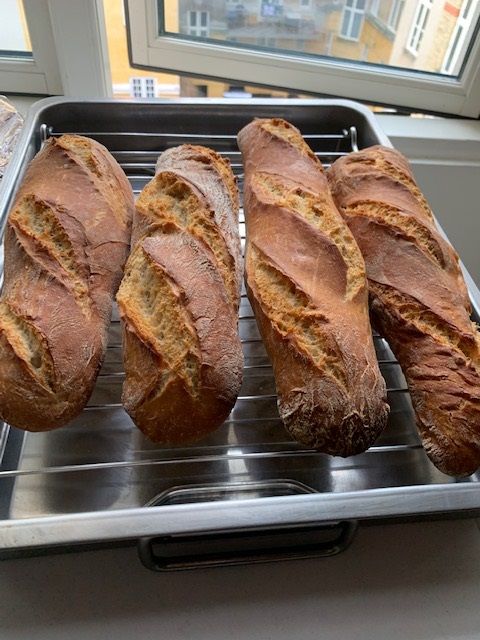 They do look beautiful (I am proud of the scoring!) and have a nicely developed bread flavor. What they do not have is big holes, but the formula is not that hydrated so that was to be expected. The family liked it.

It never ends. There is so much inspiration. And what about ciabatta: I though it was the wettest of the wet, but then I found out about pan de cristal. One of the those projects where you have to take a deep breath before starting.

And I looked a bit at Weekend Bakery. Some sound ideas and the fact they are in the Netherlands probably also means that the flour they can get is closer to what I can acquire here in Denmark. It is interesting that they use a lot of poolish, started with a bit of sourdough culture, which is not what Morton does, in that way. I can see that you end up having a much more manageable sourdough. I guess I shall try and convert my current culture to a rye one and use their methods.

I have misses where the bread just does not rise enough. Also, where it spreads out too much during the proving — probably because of a lack of structure. And that lack then due to another lack, namely lack of proper kneading and handling. I am tempted to use the Kenwood with either paddle or dough hook to be absolutely sure the dough gets to the window pane stage. Even Mr. Morton does admit that he uses a mixer for his very wet ciabatta. I would not use a mixer all the time (and as you get more skill, you do get better at handling even quite wet doughs) as the tactile feedback you get from actually touching the dough is valuable. And deeply satisfying.

And yet. Sort of a conclusion.

Men BBQ. They also bake bread. I believer that 80 — if not 90 — percent of the members of various Internet baking forums are male. It is an ideal activity: it is nerdy and scientific, it involves gadgets, and as it is an optional extra (as you can actually just buy bread) you can get the kudos without the hassle of having to put food on the table every day. Clearly a win-win situation. Take a look, for example, at this guys site (in Danish). Some people are deeper into this than I am. Or am I getting there?

I do have some observations. Many of the books and much of the Internet information about bread baking reflects the above. There are, of course, many different schools of thought. One book I read claims that 10 grams of more or less water will make a difference. Also, so will the temperature of the flour. Others totally wing it and barely measure anything, or only very roughly so.

I guess that if you bake for a living (some of the book authors do), the very precise measurements and the steady quality are both important. And I don’t think you can totally wing it, either.

But you will, as you go along, get you own feeling for things and learn to recognize what dough should be like.

And it is a magic thing, this bread making. And a very ancient one. 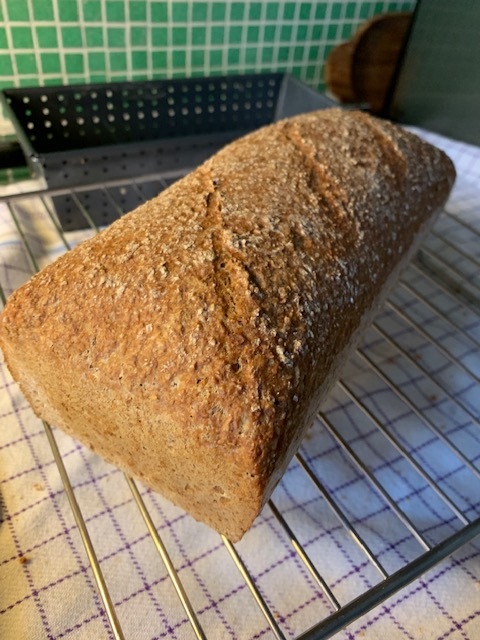 100% wholemeal wheat. Long, cold ferment. The dough was hard to work with, to say the very least. The crust thin and quite crunchy. The crumb dense enough for a sandwich bread. And the flavor quite deep and pleasing.

Pure rye sourdough. You have to work that dough hard and it takes a long time. But the result is worth it: mellow, only very slight tang, very pleasing texture.